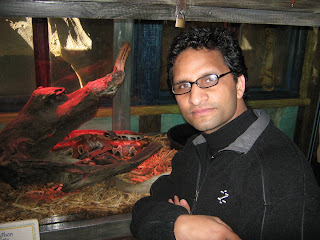 "Tantrism" also known as Shamanism is becoming very popular, and moreover, I have found foreigners more interested in it rather than Nepalese," says Guru Kedar Baral, a Banjhakri at Battisputali.

There are lots of shaman practices going on in Nepal and among such is one inspired by Kedar Baral. Initially belonging to Okhaldungha, Baral is presently based in Kathmandu. He had come here in the year 1995 and since then he has been very popular in Nepal and foreign countries for the shamanism power he has. He is also famous as foreteller. All the prediction he has made till date has been very true. In the year 2005, he also received Gorkha Dakhshin Bahu from the King.

At the age of seven, Baral was taken away by his Guru and from then on he has been blessed with supernatural powers of healing and curing people.

Sangeet Deuja, a student of B.Sc and now the follower of Guru says, "In the past one year there has been vast difference in my life. I had some problems for which I went to the doctors but my problem did not get solved. I never had faith in such things but when I came to Baral slowly I am getting cured."

He further adds, "A kind of strength is there otherwise why would I have such feelings. Some spirits have invaded in my body."

From doctors to scientists, all have been his followers till date. One doesn't believe in such supernatural powers but after his healing and treatment many people have benefited from it and have now started believing in this. He has the knowledge of 16 different languages of Nepal and can treat people belonging to different caste and ethnic group.

Everyday many people visit him to get cured for their problems. He has lots of students and followers too who have been learning from him about shamanism.

He informs, "Banjhakri is a follower of lord Shiva. Till date I have trained 35 students among which there was a doctor from America and a Scientist from Germany.

Besides that there are lots of followers from Japan too".

He further adds, " it is not a thing that everyone trusts and it is not mandatory for everyone to believe. Faith is a feeling which comes from within and people after becoming helpless from other treatment come to me. I have even treated people going to hospitals. Those who need the help of medical science need to go for it otherwise supernatural power is there."

Ram Prasad Chaulagain, a Computer Engineer who teaches in a reputed college is also the student of Guru Baral. He says, "I had come here as a visitor but got interested in this knowledge and wanted to know about it. Even I was treated by Guru and that made me impressed. Now even I have the knowledge of shamanism and have gained the power to heal people's problems. An external force or a kind of power is there which can be cured by shamans. Even medical sciences have not been able to understand about this matter.

Similarly, Rashmi Jha, a staff nurse by profession and a visitor says, "My brother was suffering from past 7 years and medical science had not been able to restore his health. I visited guru two months ago and my brother got cured after coming here. Being a nurse I myself have been stunned and now I have been regular visitor of Guru."

Ganesh Khatry, a student of Science, says, "It has been more than ten years since I knew Guru and I do believe in spiritual matters. There is a kind of supernatural strength which science cannot find."

Every year a competition is also held at Gosainkunda among the shamans. Baral has been winning the competition for the last four years. A shaman from France is also seeking knowledge from him.

There are many shamans in Nepal but those who have been taken by Banjhakri are more powerful. The students and followers of those shamans are practicing the knowledge. Besides that lots of foreigners are also coming to Nepal to know about this and have been practicing it.

Baral has also set an example in a society where only Tamangs are regarded to be shamans. Baral has plans to organize fair, which will promote the shamans of Nepal not only nationally but internationally too. Calling shamans from other countries will give an exposure to Nepalese shamans as well.

Text courtesy: Nepal Traveller, March/April 06 issue. Thanks the author and NT-e
Posted by Guru Kedar Baral at 8:43 AM