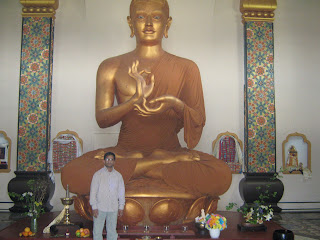 GURU KEDAR AND HIS ASHRAM

The Webster Dictionary defines Guru as “a personal religious teacher and spiritual guide in Hinduism.” Guru Kedar would certainly fit this definition, but he is much more than just a religious teacher or a spiritual guide. Not only has Guru Kedar traveled the globe spreading his philosophy and teachings on life on earth and beyond, but he has also used his “tantric” abilities to actually heal the sick, strengthen the weak, guide the lost, and uplift the discouraged. Guru received the supernatural abilities in Nepal, following his abduction, at age seven, by “Ban Jhakri” (a forest-dwelling, ape-like human progenitor, believed to be one of Lord Shiva’s associates). To learn more about Guru Kedar, visit http://www.gurukb.com/index.html.

How do you get in touch with Guru?

As Guru’s supernatural power becomes widely known, a growing number of people around the world want to meet with Guru. In recent years, Guru has traveled as far and wide as the U.S.A., Europe and, of course, Asia. Some want to meet Guru to hear his discourse on tantras, mantras, and astrology; others simply want his blessings for themselves or their beloved; and still others want to learn the “shamanistic skills” from Guru. Guru kindly offers his help to one and all. To invite Guru to your country or city, please contact him at the following address: ashram@gurukb.com and ashram.nepal@gmail.com.

In addition to keeping up with his growing international demands, Guru, a native of Nepal, maintains a strong presence at home through an establishment, called “the Ashram.” The Kathmandu, Nepal-based Ashram is a sanctuary for many who want to seek Guru’s help and advice in a wide array of issues. Here at the Ashram, Guru can often be seen in trance, a state in which the spirit enters his body; and through this spirit, Guru can see the past, the present and the future. Amazingly, and in sharp contrast to many soothsayers, Guru can use his transcendental powers to actually figure out the root causes of an individual’s physical, mental or psychological ailment, and at the supplicant’s request, even perform the requisite “puja” (i.e., a quasi-religious ritual) to address the root causes. Some examples of common ailments treated by Guru include alcoholism, drug addiction, infertility, career problems, and romance.

Guru’s Ashram, currently under the supervision of Krishna K. Bhattarai and Rina Thapa, is located at:

To many, Guru Kedar is a mystical figure and his practices an enigma. But it should be noted that Guru Kedar is a most pragmatic and open-minded person, who completely understands the skepticism (or even cynicism) surrounding his shamanistic practices.

Shamanism can be loosely defined as the “communication with the spirit world.” The spirit world here could represent the dead ancestors, or even deities and demons of a certain religious sect. The underlying tenets of this belief system are that spirits exist, that they can be good or evil, and that the shamanistic experts (called the shamans) can communicate with the spirits to influence their effects on individual(s).

In today’s scientific world, the notion of spirits and shamanism may seem a bit misguided; however, upon further reflection, one realizes that it is not necessarily so. Indeed, most or all religions in the world subscribe to this notion in one form or another. Likewise some of the most decorated scientists in the world acknowledge the existence of supernatural powers that science today simply cannot explain or deny. For instance, Albert Einstein once observed: “My religiosity consists in a humble admiration of the infinitely superior spirit that reveals itself in the little that we, with our weak and transitory understanding, can comprehend of reality.” Louis Pasteur, too, could no more deny his faith in God than he could his belief in science, when he remarked, “The more I study nature, the more I stand amazed at the work of the Creator.” In other words, the fact that we cannot see the God, that we cannot hear the spirits, or that we cannot understand the supernatural does not mean that the God, the spirits, or the supernatural does not exist.

With that said, shamanism, like any religion, is based on a set of beliefs and is not for everyone. As Guru Kedar eloquently observed: “[Shamanism] is not a thing that everyone trusts and it is not mandatory for everyone to believe. Faith is a feeling [that] comes from within." With that said, more and more people seem to believe in and seek the blessings of Guru Kedar, partly because they are at awe of his ability to “see” the past and the future, as well as impressed by his powers to address the varied concerns people have about matters such as their health, family, and career. In America, people say, Seeing is believing. Well, this certainly seems to apply for the millions that have seen Guru carry out his God-given gift.

To learn more or to meet Guru in person, please contact Guru’s Ashram at: